I rather like Packagetrackr.com, which has recently been migrating to a new site, Faranow.com. I buy stuff online a lot (mostly eBay these days), and having a single place to track everything is awesome, especially since I can get email alerts and the like.

Another nice feature of Packagetrackr was its Windows Gadget – that is, until the gadget broke many months ago. The site hasn’t updated the gadget since 2010, and I figured it was just broken and that was that. However, this afternoon, as I was idly looking at stuff online, it occurred to me that the gadget’s failure was probably due to one of Packagetrackr’s URLs changing. Windows Gadgets that get information off the Internet use XML, RSS, JavaScript, and similar technologies. That said, there had to be something in the code of this particular gadget that I might be able to fix to make it work again.

Lo and behold, a quick search of the gadget’s files and a subsequent search for those scripts (this gadget uses JavaScript to pull data from Packagetrackr’s service) online confirmed my suspicion. A quick change to main.html and maps.html fixed the problem, and I can once again obsessively track packages until the moment they hit my doorstep. 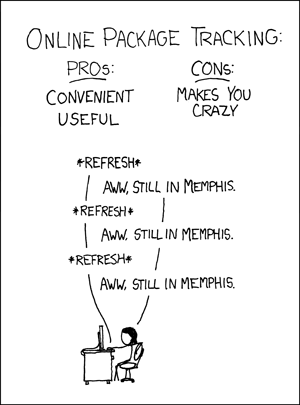 If you want to get the fixed gadget, download it here.